Households: 5568
Average number of household members: 3.1
Apartments (all types of dwellings): 7163
Source: Statistical Yearbook of the Republic of Macedonia, 2005

Total population in the municipality of Delchevo according to educational structure: 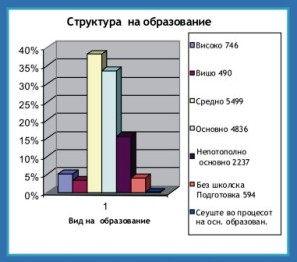 Total population in the municipality of Delchevo by nationality: 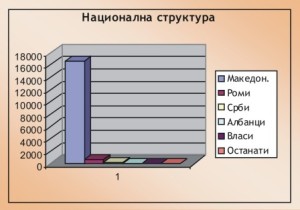 The population density in the municipality is 42 inhabitants per 1 km² and is 1.8 times lower than the average density in the Republic of Macedonia.
From the analysis of the population structure it was determined that the share of the working age population and the young population is higher in the city in relation to the rural areas. The average participation of the young population at the municipal level of 27.6% indicates favorable opportunities offered by human resources, as a factor for achieving future economic development. According to the planned forecasts, the population in the city increased in 2010, compared to 1994 by 13.7 %, and in 2020 by 29.8 %. The growth of the rural population will be at a slower pace and for the previously mentioned benchmark years the increase will be 11.5 % or 15.7% respectively.
Ask the mayor
Report a problem
Budget and finances