Air conditioning
The climate in the municipality of Delchevo is Eastern European with a modified pluviometer regime. According to the meteorological data in Delchevo, the average annual air temperature is 10.7 ° C with an absolute minimum of -26.7 ° C and an absolute maximum of 37 ° C, while in the mountains the average annual temperature drops to 3.5 ° C. The warmest month is August with an average temperature of 21.6 ° С, while the coldest months are January with an average temperature of 0,1 ° С
The clouds and fog are not great, so the year is dominated by sunny and clear days. The average number of rainy days during the year is 71, the average annual rainfall is 548 mm. Although the precipitation is relatively low, their schedule in the vegetation period (April – September) is favorable and is over 50% of the total annual precipitation.
The vegetation period with a temperature above 10 ° C lasts 191 days during the year.
Relief and soil
The relief in the municipality of Delchevo is complex and is created by tectonic movements and is represented by 4 relief forms that differ in age, altitude, geological composition, hydrological conditions, vegetation and different soils. It is mostly hilly – mountainous, and the lowland parts are mainly distributed along the river Bregalnica.

The relief in the municipality has the following structure: Lowland 600 – 750 meters (along the river Bregalnica and the lower reaches of its tributaries), Ridski – mountain 750 – 900 meters (eastern and northeastern part of the municipality) and Mountain over 900 meters (west of river Bregalnica, mountains Obozna and Golak).
According to the pedological map, in the area of the municipality of Delchevo, 12 special soil types are distinguished. Rigosol, ranchers, brown forest soils, cinnamon forest soils and lesioned have been identified as dominant.
Based on the agricultural production capabilities, the soils are grouped in 7 creditworthiness classes, from alluvial, resinous, deluvial and leached.
A soil test was performed on all major and significant sites in the municipality of Delchevo to examine their acidity and basicity (depth of 0-30 cm and 30-60 cm).
Hydrography
The main water artery of the municipality of Delchevo is the river Bregalnica, which is the largest tributary of the river Vardar. Right tributaries of the river Bregalnica are: Zhelevica, Dashtica, Repnica, Grastica, Zvegorska Reka and Gabrovcica. Left tributaries are: Loshana, Petrashevec and Chiflicka river. The total area of the Bregalnica river basin is 742.5 km2, with an average altitude of the basin of 1000 m. The average annual flow rate in Razlovci is 6.3 m3 / s. The total annual average flow of Bregalnica on the profile "Kalimanci" is 264,000,000 m3.
An important potential hydrographic facility in the municipality is the Losana dam, with a volume of 1,400,000 m3 of water, near the village of Razlovci, which is in its final phase and its filling will begin this year. This accumulation will be mainly used for complete solution of the water supply problem in the municipality of Delchevo, and partly for irrigation of the Delchevo field (300 ha).
Another important hydrographic facility built in the municipality is the Petrashevec Reservoir with a volume of 180,000 m3 of water, which is used for irrigation of arable land downstream of the Dam.
Mineral resources
On the territory of the municipality of Delchevo, significant deposits of metallic, non-metallic and energy mineral raw materials have been identified, as a significant potential for the development of the municipality.
• Coal deposits, located in Delchevo – Pehchevo Basin, with a total area of about 100 km2, third in importance in the Republic of Macedonia. The total reserves are set at around 46 000 000 t of coal.
• In the bed of the river Bregalnica there is about 90 000 000 m3 of golden alluvium from sand and gravel. The presence of 13.5 –36 t gold is assumed.
• Naturally baked clay, with proven reserves of over 10 million tons, and of significant commercial value are granites, limestones and diabases.
• Geothermal energy – during the tests on the coal bearing "Stammer – Zvegor", a medium geothermal gradient of 6.5 ° C / 100 m was determined, which indicates that the increase in temperature in the direction of depth is faster than usual.
Flora and fauna
The forests in the municipality of Delchevo cover an area of 27,899 hectares or 48% of the total territory of the municipality. In the structure of the forests the most represented is the oak forest, then the pine and finally with the lowest percentage the beech forest. Forests are rich in various medicinal herbs, berries and plants. 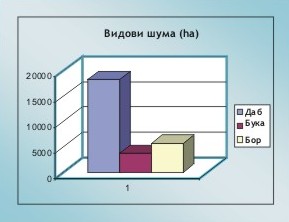 In the forest areas there is a rich flora and fauna, and special attention should be paid to the endangered species: wild boar, deer, wild rabbit, black eagle, partridge and owl.
Regarding the ownership: 49% from the forests in the municipality of Delchevo are private, and 51% are state-owned.
The forests in the municipality of Delchevo are deficient with wood mass, ie. the needs for a certain tree of the households are greater than the determined annual cutting edge.
Agriculture
The agricultural land covers 46% of the total area of the municipality of Delchevo. According to its geographical-topographic position, favorable climatic-soil conditions, available pastures and meadows, the municipality has preconditions for the development of fruit growing and animal husbandry. Agricultural land 10,089 ha
Pastures 3,408 ha
Total 13,497 ha Arable agricultural land (private property): arable lands and gardens 8,679 ha, orchards 626 ha, vineyards 8 ha, meadows 782 ha or a total of 10,095 ha
Arable agricultural land (state ownership) 683 ha. Structure of sown areas
1. Crops: cereals 5,450 ha, industrial crops 200 ha, horticultural crops 900 ha, fodder crops 540 ha or a total of 7,090 ha
2. Fruit crops (number of stems): apples 24,975, pears 15,870, quinces 640, plums 82,700, peaches 955, walnuts 2,562.

On the territory of the Municipality of Delchevo, the Ministry of Life for natural rarity declared three sites for which the Municipality of Delchevo previously within the Nature Conservation Program in Macedonia (PZP), a project of the Swiss Agency for Development and Cooperation (SDC) coordinated by Helvetas Swiss Intercooperation and Pharmachem, in partnership with the Center for Development of the East Planning Region (CRIPR), prepared three elaborations for valorization of the natural rarity: the speleological object Kiselicka cave, the characteristic geological profile at Zvegor and the Paleontological site Stamer.

The proclamation of these three sites as a natural rarity will contribute to the protection of important sites, but also their putting into function of tourism, which is a priority goal in the LED of the Municipality of Delchevo. The Municipality of Delchevo plans in the next period to prepare reports and submit applications for valorization for the localities: Kukulje near the village. Nov Istevnik and the cave Konjska dupka near the village. City.

The Paleontological site Stamer is rich in Pikermin fossil fauna located in the Delchevo region at a distance of 5 km southeast of Delchevo near the village of Stamer, and the area of the site is 25.6 hectares. According to the Decision published in the Official Gazette, the Summer Paleological Site is managed by the Municipality of Delchevo and in order to prevent damage or destruction of the natural rarity, the municipality undertakes activities for preservation and maintenance of the natural rarity, as well as protection measures. In that sense, the Municipality can conduct scientific research and monitoring after obtaining permission from the Ministry of Environment and Physical Planning, promotes natural rarity as a tourist destination, marks it with appropriate information boards, conducts educational activities for the need to preserve the site. The implementation of activities and actions within the limits of natural rarity, such as construction of access paths and arrangement of places of rest is done in a way that provides a high degree of protection of biological and landscape diversity in order to ensure proper management of natural rarity .

The paleontological tomb of Pikermin fauna was determined and part, scientifically researched 12 years ago, when scientists from the Natural Science Museum in Skopje discovered important fossils of Pikermin fauna, such as the unique in Europe, giraffe skull, mastodon, fossil, fossil etc., fossils 10 to 3 million years old.

Pursuant to the Law on Nature Protection, the Ministry of Environment and Physical Planning declared the – Kiselica Cave located on the territory of the Municipality of Delchevo in the village of Kiselica a natural rarity. Pursuant to the Decision for declaring it a natural rarity, it will be managed by the Municipality of Delchevo, in order to prevent its damage, destruction, as well as to prevent the performance of other activities by individuals and legal entities with which it can directly or indirectly the natural rarity is endangered, the mayor undertakes activities for preservation and maintenance of the natural rarity. Also, protective-preventive measures will be implemented, but also activities will be undertaken for arranging the space, setting up information boards, etc.

Although relatively small, Kiselicka Cave is significant in many respects. It is a rare registered occurrence of a cave in the eastern part of Macedonia, more precisely in the Kraistka tectonic zone, where so far only two caves have been registered (Kiselicka Cave and Konjska Dupka). It is additionally significant after its appearance in a small tectonic block of Triassic limestones, whose location is very small in the eastern part of Macedonia.

The Ministry of Environment and Physical Planning on the basis of the Law on Nature Protection adopted a Decision granting the status of natural rarity to the characteristic geological profile in Zvegor which is located about 1 km north of the village Zvegor at an altitude of 740-850 meters on the eastern slopes of the Ilin Kamen hill to the road leading to the border crossing with the Republic of Bulgaria and covers an area of 7.8 hectares.