Delchevo marks 76 years since its liberation

Delchevo marks 76 years since its liberation 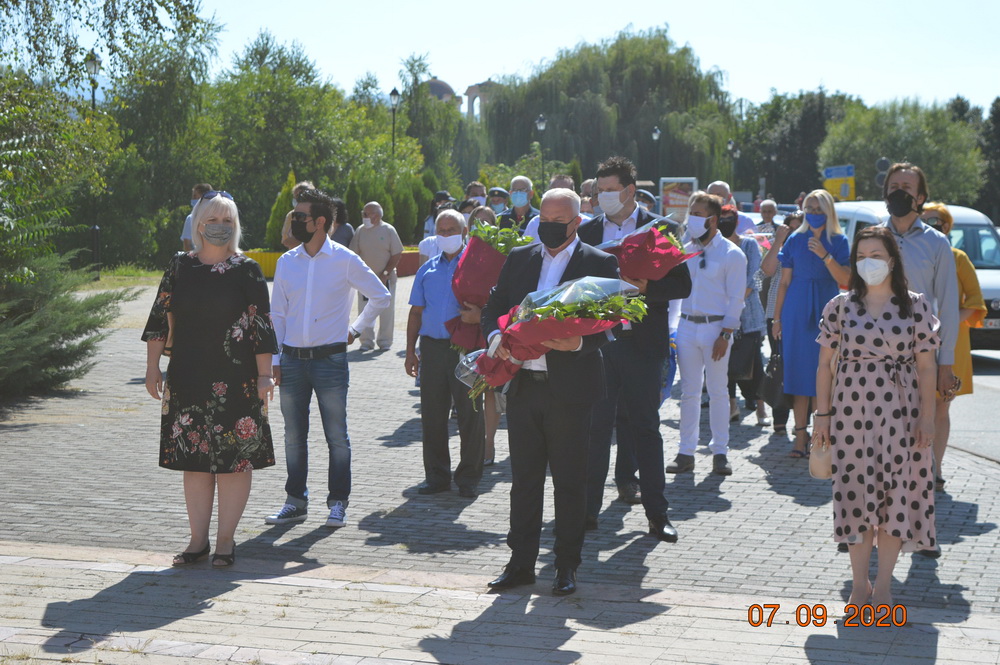 Вo festive atmosphere, Delchevo today marks 76 years from liberation and 29 years from independence на Republic North Macedonia.As part of the commemoration in front of the monument of fallen fighters in the city center which preserves the memory of fallen fighters in the National Liberation War from Delcevo, a delegation from the Municipality of Delchevo led by Mayor Goran Trajkovski, a delegation from the Council of Delcevo led by President , representatives of institutions, political parties and citizens' associations.

The celebration на both significant historically dates for Delchevo continue with The solemn session на The council на Municipality Delchevo на which the president на The council, Dragan Manevski, who expressionand gratitude to all who with its labor and engagement gave contribution for development на Delchevo, stressed that it remains to us obligationand yes let's continue yes we work in interesting all citizens and in interest на overall development на ours municipality.

- The Council of the Municipality of Delchevo, made most of the decisions unanimously, for which I am especially grateful to all members of the Council. We have always decided with a lot of responsibility and rationality and we have made decisions that are in the interest of all citizens. The council discussed 273 items on the agenda. We have adopted all programs and adopted all reports of the Municipality and local institutions that are under the jurisdiction of the municipality, several decisions have been made to include illegally constructed buildings in urban planning documentation of individuals, as well as several decisions on priority projects for application to the Agency for Financial Support of Agriculture and Rural Development from the Program for Financial Support of Rural Development,emphasized Manevski.

On The solemn session were presented current projects на Municipality Delchevo, and the mayor Goran Trajkovski in its address referred to the current health crisis and all measures taken by the municipality to prevent the spread of the disease, expressing special gratitude to donors who helped purchase protective masks that were distributed by institutions and local and urban communities, as well as disinfectants, and especially emphasized the commitment of the Health Center "Goce Delchev", TPPE and PCE "Bregalnica" for selfless contribution to the fight against covid-19.

- As a municipality, we seriously approach the challenge to ensure a safe start of the school year, to enable the educational process to take place smoothly, to create conditions for education in the new normalcy. Analyzes are made in the schools and the decision will be made in accordance with the protocols from the Commission and the line Ministry. We are maximally invested to respond to the requests and needs and I am convinced that with the support of the line ministries and the personal responsibility of each individual, student and parent, but also educator and educator, we will succeed in that and provide a safe educational process. , said Trajkovski

In his address, Trajkovski emphasized that despite the health crisis, all capital projects promised in his program continued.

On The solemn session was assigned the municipal September 7 Award of Dr. Goce Stojmenovski, doctor at the Emergency Medical Service in Delchevo, as well as the municipal recognition for special contribution to the culture of Zenil Redzepov-Expert who this year marks 45 years of activity. Also, the company "Zegin" received special recognition for cooperation with the Municipality of Delchevo and for social responsibility during a pandemic.

At the Formal Session, the awards for the most beautifully landscaped yard were awarded.

Due to the current pandemic, traditional cultural and sports competitions have been canceled.